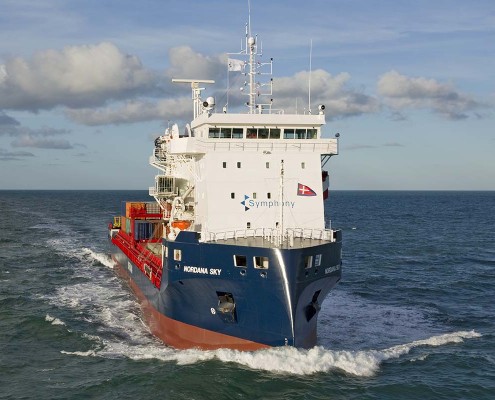 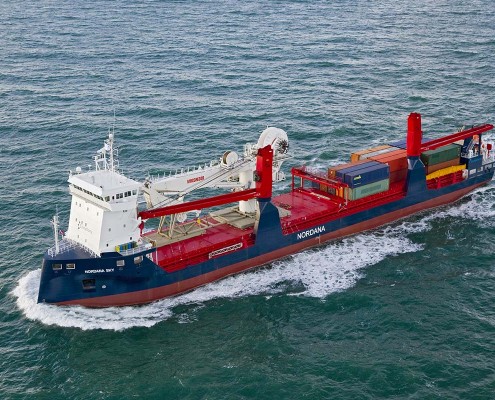 Nordana Sky is the first vessel in a series of six ships of the completely new ECOBOX general/project cargo ship design. It features a single large boxshaped hold of 429.000 cft that can be optionally sailed ‘open top’ without maindeck hatches. Her hull caries 10550 DWT at main dimensions (Loa X B X T) 122.5 X 17.0 X 7.8 mtr. The deckhouse is placed on the foreship to optimally protect the cargo. Cargo handling can be done with the ships own 50/85 tons double cranes.

At the maiden voyage of the ship the special ECO bulbless canoe bow proved to perform very good in rough seas, with moderate acceleration levels and high sustained speed in large waves.
At this first trip Nordana Sky will be able to demonstrate her full capabilities. After loading windmill components in Esbjerg the vessel made a stop-over in Kritiansand, where a large 500 tons Knuckle boom crane was loaded on deck as project cargo for the U.S. With this cargo the ship sails cross-Atlantic at this moment.

While sailing at the North Sea with this first load on her hatches, Nordana Sky was captured through the lens of Flying Focus, which resulted in attached spectacular photos.
As builders we wish Nordana Sky and her crew many safe and prosperous miles ahead!