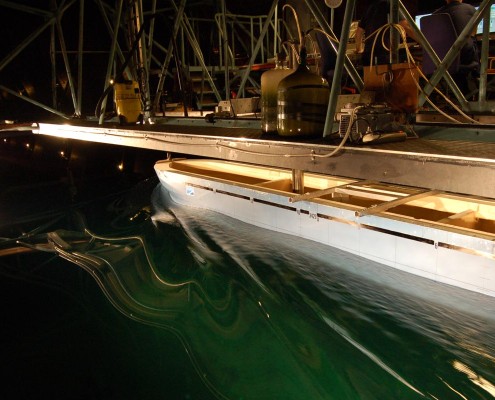 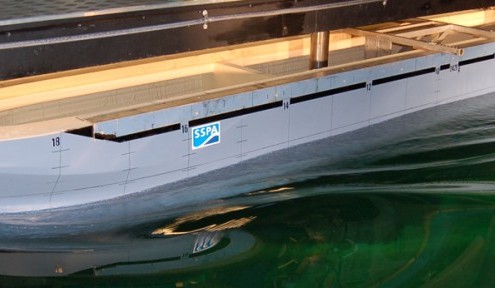 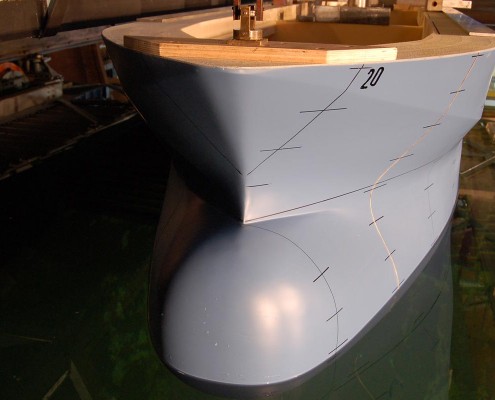 Ferus Smit was recently awarded the order for building 2 more ships for our long term client Erik thun AB. The ships to be built under Nb. 415 and 416 are a further development of the earlier series known as our ‘Trollmax’ designs. These are bulk oriented general cargo ships specially dimensioned to exactly fit through the locks of the trollhattan canal; the connection between the Vanern (great lakes on interior south Sweden) and the North Sea at the city of Goteborg.

Extensive hull form optimisation studies for the new mark III design resulted in improvements up to 19.4% in power demand compared to the preceeding mark II ships. These gains were obtained while at the same time the displacement of the hull was increased by 100 tons!

For the hullform design and optimisation we used the succesfull design of the mk II Trollmax (5 ships built, leader Nb. 337 Eken) as reference starting point. These hullforms were judged to be of good quality, not only by us, but also by our competitors as it was even copied by other yards in the past….

The new hullform was extensively analysed and optimised using our in-house CFD potential flow software, in which wave patterns around the hull can be predicted. After several variations the final choice was made to adapt a very large bulbous bow instead of our ‘bulbless’ bow concept. For this specific application a very large bulb has advantages; displacement can be maximised to the exteme within fixed absolute hull length (due to locks size) while Perpendicular length should stay below 85 mtrs. The results of this optimisation were very promising, a significant reduction in wave making resistance was achieved, while the displacement of the hull was also increased.

To get out all the little bits a further research project was started with SSPA, the Goteborg based model test basin, in which completely virtual model testing by CFD calculations was performed. Full viscous flow (turbulent) calculations were made for both resistance and propulsion (wake). These advanced calculations were made for both the ‘old’ mk II hull and the new design. Comparing both hulls in detail, showed that gains could still be achieved by modifications in the aftship, influencing the overall propulsive efficiency through propeller inflow and low pressures around the aftbody.

As final verification traditional model test were performed at SSPA. The tests demonstrated that the calculation results that we first suspected to be too optimistic were actually correct. An improvement was measured up to an amazing 19.4% less engine power needed at same speed, obtained with a fuller hull form in which the displacement was increased with some extra 100 tons.

With such figures these ships will be truly green, and not only because of the green paint on their hulls!